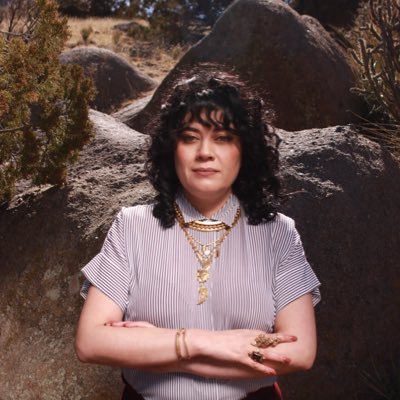 Dr. Bernadine Hernández is an Associate professor of American Literary History at the University of New Mexico. She specializes in transnational feminism and sexual economies of the US-Mexico borderlands, along with American Literary Studies/Empire, border and migration history and theory, and Chicana/Latina Literature and Sexualities. Her forthcoming book with UNC press is titled Border Bodies: Racialized Sexuality, Sexual Capital, and Violence in the Nineteenth Century Borderlands, which is the first book length study that focuses on sexual capital and gender and sexual violence in the borderlands in the nineteenth and early twentieth-centuries through recovered archival work. She is also the co-editor of the first edited collection on Ana Castillo titled New Transnational Latinx Perspectives on Ana Castillo, published with University of Pittsburg Press in Spring 2021. Her other publications appear in Comparative Literature and Culture, Transgender Studies Quarterly, Women’s Studies Quarterly, among others. She is also a public facing scholar and works with the artist and writer collective fronteristxs, a collective of artists and writers in New Mexico working to end migrant detention and abolish the prison industrial complex through creative activism. She sits on the City of Albuquerque Public Arts Board and is launching a Border Literacy Project with the fronteristxs. Her forthcoming community engaged scholarship is a five-year project titled The South Valley Solidarity Economies Development Network, which is a collaborative project to create solidarity economies in the South Valley of Albuquerque, New Mexico through youth programming, ages 5-25.

Southwest Borderlands in the 19th Century

Through the 19th Century, the US-Mexico border moved repeatedly, and the shifting borderlands were a space of cultural and economic transition that often gave rise to racialized gendered violence. In this episode I speak wit…